Twinning towns of Weil am Rhein 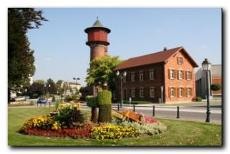 Since 20th May 1962 Huningue is twinning town of the large district town Weil am Rhein. It was mentioned for the first time as a medieval settlement with the name “Villa Huninga” in a document dating from 828, which unfortunately says nothing about the settlement or its inhabitants. The document is a deed of donation, in which a lady named “Pertcardis”, assigs her goods, situated in "Lollinga" in the Breisgau, to the monastery of St. Gallen. Huningue is the place, where the document was issued.

During the Middle Age nearly each time this name is mentioned there is a connection to the church, for example clerical fees, the “Dinghof” (a court in the possession of the
cathedral chapter Basel), a procession, which took place each year from the Basel cathedral to Huningue etc. Huningue lies in direct neighbourhood to Basel and was always oriented to this large city, particularly, after it had obtained importance as a bishop's city.

Interestingly enough from an undefined moment on also the Habsburgers appeared as owners of Huningue. While the village was assigned as a feud to the bishop of Basel in 1310, a Habsburger count owned it in 1398. In some cases the rivalry between Basel and Habsburg became obviously, for example when the the “Turk Penny” was levied during 1509 to 1510. At that time the farmers of Huningue refused to pay with the justification that they were people of Basel.

As the Habsburger often lacked of money, they left Huningue to Basel as a deposit. So the village was at some time in the possession of Basel, which introduced the reformed church service. In the consequence Huningue was the only reformed municipality in the Sundgau, a region characterized by the Catholisicm.

In 1623 Habsburg took the village, which Basel hoped to keep itself, again into its possession. After the conclusion of the Westphalian Peace in 1648, Huningue was under the control of the French crown. And because it lay on a traditional transition over the Rhine it became a fortress.

In 1801 Huningue still had only 945 inhabitants, in 1999 it counted more than 6000. Between 1910 and 1961 a Tram connected Huningue with Basel. Since 1960 a rapid development of the industrial zone followed, which became an expansion area for the chemical industry of Basel. Approximately 1500 commuters drive to Switzerland daily. Nevertheless it is amazing, that such a small city could develop an ultramodern infrastructure thanks to the financial profits achieved by the industrial giants of Basel. There is e.g. a new sport hall, the cultural centre “Le Triangle” and the sports centre at the whitewater channel, which is the largest supraregional attraction of the city with all types of watersports (canoeing, kayaking, rafting).

The english city Bognor Regis has a town twinning partnership with Weil am Rhein since 06th September 1987. As regards local politics the municipality reform of 1979 Bognor Regis is divided into three parish councils (Aldwick, Bersted and Felpham) and one town council (Bognor Regis), which are politically independent from each other and their own local council. These councils are however relative unimportant, since the responsibility lies in the hands of the Arun District Councils, a local authorities association of the three cities Arundel, Bognor Regis, Littlehampton and approx. 20 smaller villages.

Bognor Regis already exists for more than 1000 years. Although its long history was characterized by kingship and rough characters, the mild climate and the wonderful sandy beaches are appreciated very much by everyone.

The city was founded by a Saxon troop and probably called "Boecgo-Nor" originally. Later the name was Bognor Rocks and since the beginning of the 1930s it is Bognor Regis. In 1784 baron Richard Hotham intended to make a gregorian metropolis out of this city "which would outshine the vulgarly city Brightelmstone (Brighton)”. He further suggested a change of name for the city to Hothamton. Although he substantially began with the construction of more impressive buildings, the name was never changed as he hoped it would. After Bognor had been connected to the railway network in 1864, its popularity as a bathing resort rose enormously.

A visitor, who left a durable impression, was no other than king George V. He spent a vacation here in 1929 after a very long and serious illness. He was so content that he awarded the city Bognor the royal title "Regis" at its silver anniversary. 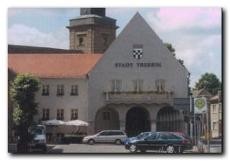 Since 31th March 1990 Weil am Rhein has a town-twinning with Trebbin, a city in the federal state Brandenburg. It lays in the county Teltow-Flämig about 30 km of Berlin.

The city was mentioned in documents for the first time in 1213. The history of Trebbin began with “Arnoldus de Trebin”, who owned the castle Trebbin as a feud. The name Trebbin is derived among other things from the western slavic word "trzebienie", which means uprooting. In 1315 the city received its independent jurisdiction. In the 15th century the Sankt Annenkapelle was built. It is the oldest and still today well kept building in the city. Trebbin was destroyed by a fire in 1565, except for the church and a few houses. At the end of the Thirty Years' War in 1648 only 25 citizens lived in Trebbin.

The foundation-stone for the "new" city hall was lain in 1797. This house served the city administration over 140 years. Around 1850 Trebbin counted approx. 1800 inhabitants. Around 1900 the horticulture developed in Trebbin, thus the number of inhabitants continued to grow. The catholic church, the “Weiler Platz” is seated behind today, was built in 1912. The foundation-stone for today's city hall was lain in February 1939. After the end of World War II Trebbin had about 6000 inhabitants because of refugees.

In the rural region around Trebbin, characterized by agriculture and market garden enterprises, the increasing expansion of commercial and living areas as well as the intention of the federal state government to extend the planned location of the large airport in Berlin, will confront Trebbin with new challenges in the future. The further development of the airport in Schönhagen will also affect the development of Trebbin and its quarters. A rural idyll with a strong shot of urban character - that is for what Trebbin is valued. Surrounded by delightful nature Trebbin is a starting point for expanded and relaxing walking-tours into the vicinity.

To top of page