Weil am Rhein, a large district town, seated in the border triangle Germany - France - Switzerland, was mentioned for the first time with the name “Willa” in a document of the monastery St. Gallen (Switzerland) on 27 February 786. 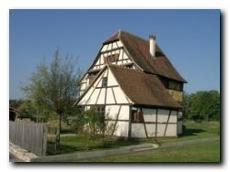 The former farming village at the east of today’s limit of land-mark was affected for centuries by agriculture, primary by the viticulture. The climatic conditions of the Upper Rhine region as well as the location of the village particularly advantaged this cultivation. The ascension of the village to a city essentially began with the development and the increasing importance of traffic in the 19th and 20th century. Thus it was probably the favourable traffic conditions, which helped Weil am Rhein to its origin. As the Roman emperor Trajanus built his “Black Forest Road” from Augusta Rauracorum (Kaiseraugst, Switzerland) to the southern Black Forest around 100 A.C., this army route led also from Grenzach and Riehen over Weil am Rhein and further to the Upper Rhine region. Farmsteads and so called “Meierhöfe” gradually developed along these “Roman Road”. One of these estates lay southern of today’s city quarter Haltingen towards the end of the first century A.C. In 1958, the remainders of an old roman house were found during construction works.

Probably the name “Weil” is also of roman origin. In 1246 the name was “Wile”, in 1298 “Wila”, in 1344 “Wil am Schlipfe” and in 1380 “Will”. Finally the name “Weil” resulted. It might also apply that Weil am Rhein belongs into the early development time between the 6th to the 8th century. In former times, a meanwhile disappeared settlement, the village “Leidikon”, lay between Weil am Rhein and Riehen (Switzerland) near the mill-pond. This place might have been integrated into the boundary of Weil am Rhein likewise “Ötlikon” (today’s city quarter Friedlingen), seated near the Rhine. Weil am Rhein had thereby expanded and put its boundaries up to the Rhine, which was the foundation-stone for an at that time unexpected development.

The accession of Baden to the "Badischer Zollverein" (German Customs Union) introduced the further progress of the village. In 1835 a customs station was established on the “Leopoldshöhe”, which controlled the old important route from Freiburg to Basel. It also formed the base for the further development of the Leopoldshöhe. The change from a village to a city however began with the progress of the railway network. Without this infrastructural advantage, Weil am Rhein would not be conceivable today. In the years 1851 to 1855 the "Großherzogtum Baden" (Grand Duchy Baden) built the railway line to Switzerland. Weil am Rhein got a railway station and extended at the same time considerably the urban road connections. In 1913 the marshalling yard was put into operation. After the end of the World War I the railway administration moved the domicile of some hundred officials from Basel to the newly built housing estate "Gartenstadt" on the Leopoldshöhe in Weil am Rhein. By these measures the number of inhabitants increased to far over the double, namely 6600 inhabitants. Meanwhile the city quarter Friedlingen began to grow as Swiss textile factories settled there. 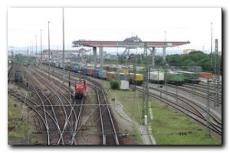 Mainly because of location advantages manufacturers from Basel decided to settle their companies in Friedlingen. Reasons were the Rhine as a shipping route (in 1934 the Rhine harbour was founded) and the numerous available workers. Nevertheless Friedlingen counted already 1204 inhabitants in 1928. On 16th August 1929 the Statedepartment of Baden finally lent the town the characteristic of a municipality and at the same time the official name “Weil am Rhein”.

Even after the political changes of 1933 the aim of town development remained the same: The relocation of the city centre to the area “Leopoldshöhe”. During World War II Weil am Rhein had to suffer numerous victims and partially large building damages. After war the population continued to grow rapidly. Because refugees settled down the number of inhabitants rose from about 9.000 in 1939 to approximately 19.000 in the year 1966.
The city with its four quarters (Altweil, Leopoldshöhe, Otterbach and Friedlingen) presented itself as a lively and pulsating community as early as the Sixties of the last century. Two federal highways, the B3 and the B317, lead through the city as large traffic veins. Today’s most important traffic routes should not be forgotten: the Rhine as shipping route and the federal motorway A5, which is connected to the Swiss motorway. Considering the increasing Europeanisation the trinational airport Basel-Mulhouse-Freiburg is another important factor within the region.

Plans to strengthen the efficiency of administration, which were preserved already around 1930, were finally realised in the years 1971 and 1975. The hamlet Oetlingen was integrated in 1971, Haltingen and Märkt followed in 1975. Thus Weil am Rhein became "Große Kreisstadt" (large district town) in the district of Lörrach in 1972. After the execution of the municipality reform, the city was developed in its present-day borders. 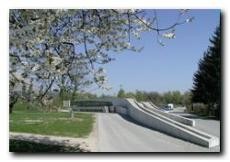 An outstanding event in the urban history was the national garden festival “Grün99” in 1999. It was a big challenge for the city and brought the establishment of suburban recreation areas as well as the revaluation of several other areas with it, which were used under value up to that time. A reminder of this time is the “DreiLänderGarten” (Garden of Three Countries), an ambitiously designed park in the south of the city with a direct connection to the “Langen Erlen”, a suburban recreation area on the Swiss side.

Mainly in the last 20 years trend-setting developments changed the face of the city again. And an end of this development is not to be seen yet. At first the structural development in the city quarter to Friedlingen should be mentioned. Three shut down industrial areas were renovated and got a new assignment. Big companies like Endress + Hauser (a measuring technique enterprise), TFL (leather products) or the newly established company MEMORY Metalle GmbH (high performance metal products for medical applications, the automobile industry and space travel) settled there. The "Rheincenter", a large shopping centre, was established for customers in the border triangle. It accommodates among other things a large cinema. There were also investments along the main street, which changed the townscape of Friedlingen positively.

The pleasantly arranged “Hüninger Platz” at the main street has developed to a place of numerous cultural events. The former textile area “Schwarzenbach” became a cultural centre with a mixture of living, working and culture. The extended "Rheinpark" with a cafe and a ship landing place for person shipping contributes to the leisure opportunities. Thus this city quarter was substantially revalued as a work- and living quarter.

In the Rheinpark you will find also the "Dreiländerbrücke" (Three Countries Bridge), which connects Weil am Rhein and its French twinning town Huningue. It has an overall length of approximately 250 meters and was sketched and built by Dietmar Feichtinger (architect) and Wolfgang Strobl (civil engineer, LAP Leonhardt Andrae & partners). Owners are Weil am Rhein and the Communauté de Communes de Trois Frontières. The steel bridge appears very filigree by its construction and stretches like a rainbow over the Rhine. 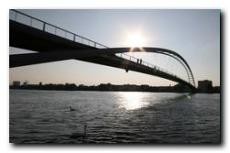 For the construction of the bridge approximately 1000 tons of steel were processed. The so called central span of the bridge counts 238 meters, which is the world record (longest cantilever bicycle- and footbridge). The project was promoted among others by a subsidy of the European Union (1.68 million €). After an oscillation test with more than 1000 participants had been carried out in january 2007, the bridge was opened for the public in March 2007. The "new connection" over the Rhine was celebrated by 75,000 visitors with a two-day festivity called "VIS à VIS" in the summer of 2007. Since then the Dreiländerbrücke has won many prizes, among others the "Deutscher Brückenbaupreis 2008" (German Bridge Building Award), the Arthur G. Hayden Medal 2008 and the Renault Traffic Award 2007.
The mostly new arranged city centre on the Leopoldshöhe offers the retail trade and service enterprises of Weil am Rhein sufficient scope to develop. Examples are the recreated main street, the corner buildings at the Schillerstrasse or the area “Insel” with a shopping centre in the intersection of the two main transport axes B3 and B317. The railway area was reconstructed by the startup of the freight handling station Weil am Rhein/Basel in 1999. 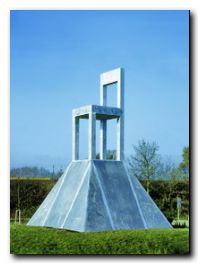 The slogan "Take a seat in Weil am Rhein" does not come by chance. The privately led Vitra Design Museum probably is the best known of the six museums in Weil am Rhein. Approximately 70,000 guests visit the design museum on the average in the year. In order to lure these visitors into the city centre, a working group of manufacturers, representatives of the city and the enterprise Vitra developed the idea of the “Stadt der Stühle" (city of chairs). The oversize designer chairs, the so-called “Maxiaturen” in the urban area are part of this concept. The slogan “Weil am Rhein - city of chairs” and the new city marketing concept were established in 1998.

To top of page